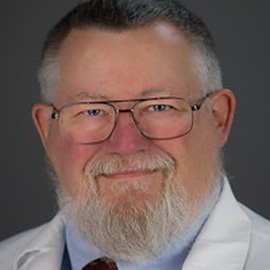 Dr. George's research interests include clinical management of Parkinson's disease, tremor and dystonia, and he has been active in clinical trials of new medications for Parkinson's disease and dystonia. He is also involved in research on measuring the impact of neurological disease on patient function. Dr. George's laboratory research has focused on neuronal reaction to injury and neural regeneration. Dr. George has a Ph.D. in pharmacology, as well as an M.D., from Case Western Reserve University, and was a Grass Fellow in Neurophysiology at the Marine Biological Laboratory in Woods Hole, MA. He has lectured and written extensively on movement disorders, and has served as a consultant to U.S. and international pharmaceutical firms.